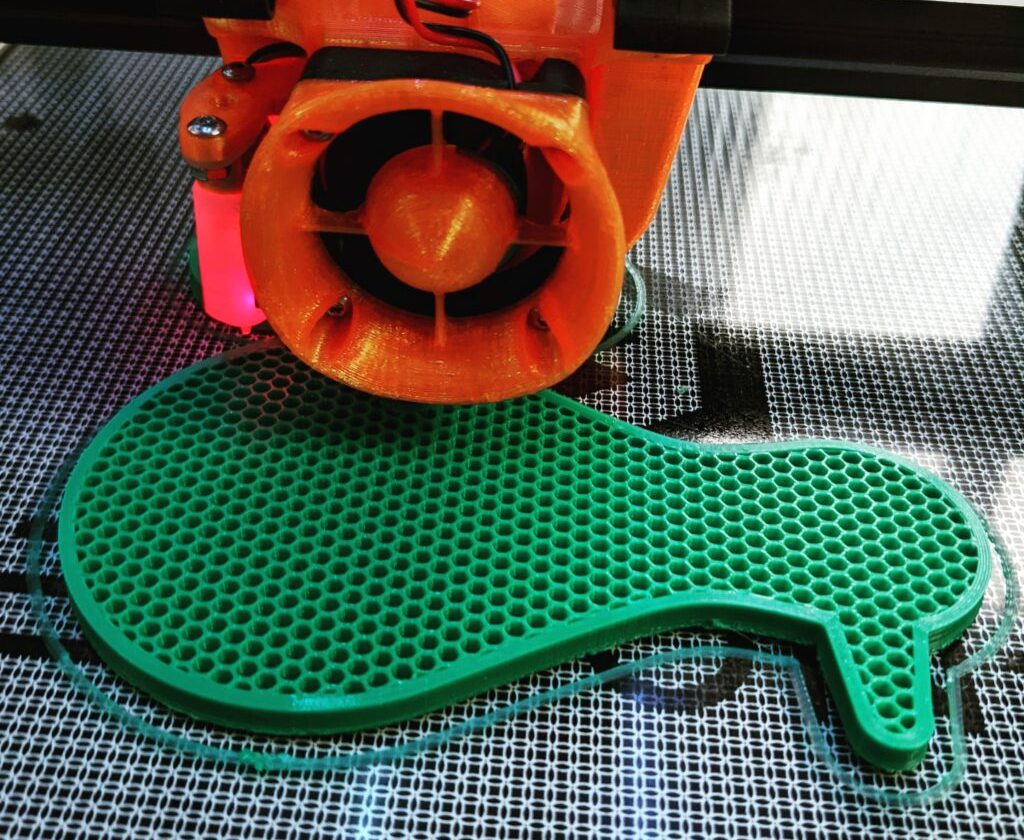 Encouraged by Gary ‘Thinker’ Hall from CaveWorkz I joined the Eryone family just before Christmas. Initially I had been looked at a Prusa i3 printer retailing over £500 but a Black Friday deal with suggestions of possible upgrades made the Thinker SE2 just far too tempting as a cheaper entry level option.

One of the things I was keen to print from the start was the more exotic PLAs like Wood and Marble. I’m already turning and machining things from wood and in a busy market I thought mixing in some 3D printed decorations might be a good way to stand out.

GH pointed me in the direction of a number of upgrades and modifications that would make the Eryone Thinker SE even more suitable.

First of we come to Madizmo’s Thinker S Dual Blower Hotend for E3D V6 modification with the addition of a Nozzle X upgrade. It requires a bit of printing before hand so make sure you are ready before dismantling the printed. Although PLA/PLA+ can be used PETA is far better due to its higher temperature characteristics.

What the company says about the V6

Our flagship jack-of-all trades all-metal HotEnd. V6 is suitable for practically any printer, and has the widest array of upgrade options. For everyday printing or exotic circumstances, V6 will deliver the reliability and performance that are E3D’s specialities

Author: Gabe S. (and 3 other contributors)

Assembling the V6 is straight forward and takes a few minutes. The key points for me were getting the threads and subsequent tightness right, applying the appropriate amount of thermal paste (I applied too much and some of my early filament was actually the paste working its way out the system) and getting the cable routing right. You won’t need the fan housing and fan as this is upgraded/swapped for printed ones by Madizmo.

The documentation for the V6 Hot End can be found at https://e3d-online.dozuki.com/c/V6 but in addition you will need:

At the same time I swapped to the DotBit Dual Drive Extruder which has two driven cogs either side of the filament rather than a single drive cog and bogie guide pulley. There is some debate as to which way up the drive cog should be attached to the stepper motor. My advice is offer them up in both orientations and see what looks best to you. Full Disclosure – mine is as per the set up video below. There is some useful tips in the file below about tightness.

In order to make all the new mechanics work the OEM Motherboard (good as it was) needed to be exchanged something else. GH pointed me in the direction of the BIGTREETECH SKR V1.4 & SKR V1.4 TURBO board thats been well received by the 3D Printing community.

The following video guides give useful information on the board and how to set it up.

Using the TMC2209s and cutting the DIAG Pin

The image above shows the jumper positions for your TMC2209. If you are using the TMC2209s and are not using the Stall Guard Function you need to cut off the DIAG pin on the driver as shown below. Now, I wasn’t thinking and did this for all six drivers provided. In reality, if using a BLTouch you only need to do this for two (2) of them – the X and Y.

You will want to fit your board under or to the side of your printer. Madizmo has a Eryone Thinker S case for SKRv1.3 and PI3 together if you are someone who likes using Octaprint etc. I wanted my Pi separate with a screen as I had plans for a second printer and some cameras so made my own remix of the Madizmo box (link to follow). Both require extra 24v fans.

The following image shows how one solution for connecting the board. The BLTouch will work using the provided ports providing the Firmware configuration is correct. The Part fan must be connected to Fan0 as its the only one which is PWM controlled. Fans 1, 2, 3 are all permanent On and should be used for the motherboard (steppers and general cooling) and for the Hot End. Further information on Fan Control is available via SKR 1.4 – Fan Control. The NeoPixel RGB port is marked in blue – for this you will want the DC Bridge (see below).

One criticism of delta printers is the stability in their yoke especially with upgraded and heavier extruder and hot end mechanisms. GH recommended the RVOLT – Rear Frame Brace – Eryone Thinker modification.

Having completed it the jury is out. It prints ok – I needed to resize all the holes to take M3 bolts. It feels like it should do the job but there is still some flex (whether the type that would impact on a print – who knows) and this might be down to the shear impossibility of getting all the mount bolts and their t-nuts in place and fixed.

If you do decided to go down this route you will need to get some additional M5 bolts in 35-45mm length such as these from GWR Fasteners and some T-Nuts (I rather like these Spring ones from Makers Mate).

One excellent little upgrade suggested by GH was these bearing screw holders. Although installing them alongside the additional bracing they have made everything feel a little tighter.

WORD OF WARNING: Because of my bracing, bearing holders and extruder upgrades the max printing height has reduced by 100mm to 300mm.

So there are a few ways you can get firmware for the printer:

Without doubt the way to edit and build Marlin for the SKR1.4 is in Visual Code and there are two videos provided by Teaching Tech that help set up a Marlin Development Environment in Visual Code and get the basic configuration done (see below).

The TL;DR; set up

The following is incomplete and not exhaustive. There may be more to be done. Once I have a working configuration I will upload it here.

There are a number of essential changes that need to be made, numerous optional changes and then just differences between the main Marlin default and Eryone, BigTreeTech branches. Using the Marlin default as a base, I have tried to list all those I am aware of and that I believe affect how the machine behaves. Good suggestion from GH is to use an online diffchecker to compare differences between files. Some of the values are taken from 3dwork.io/complete-guide-skr-v1-4-and-tmc2209.

There are two motors listed by Eryone:

However, three different ones are used on the machine itself:

Well, here’s my take on it. Those stepper motors are rated such that for two coils held stationary, each at the rated current (2A), and operating up to the maximum rated ambient temperature (50C), the internal temperature rise over ambient will not exceed 80C and thus not exceed the rated temperature for the specified insulation class (Class B, 130C).

However, in a 3D printer application the steppers may be energized but stationary for an indefinite amount of time and the “two coils operating at” limit should apply. So, the peak current limit should be set to 2A or, equivalently, the RMS limit would be set to 1.4A.

The following table shows the values I have found, calculated and ended up using as a starting point. You can verify UART coms with M122 provided MONITOR_DRIVER_STATUS and TMC_DEBUG are enabled.

Work in Progress / To be Done.

Excessively long retractions will cause issues by dragging soft filament into cold areas. E3D-v6 hotends need less retraction than most hotends. For direct extrusion systems you should use anywhere from 0.5mm-1.0mm, for bowden systems you might want to go up to 2mm. Retraction beyond 2mm is likely to cause issues.

← Weewx into WordPress
Getting your prints to stick. →