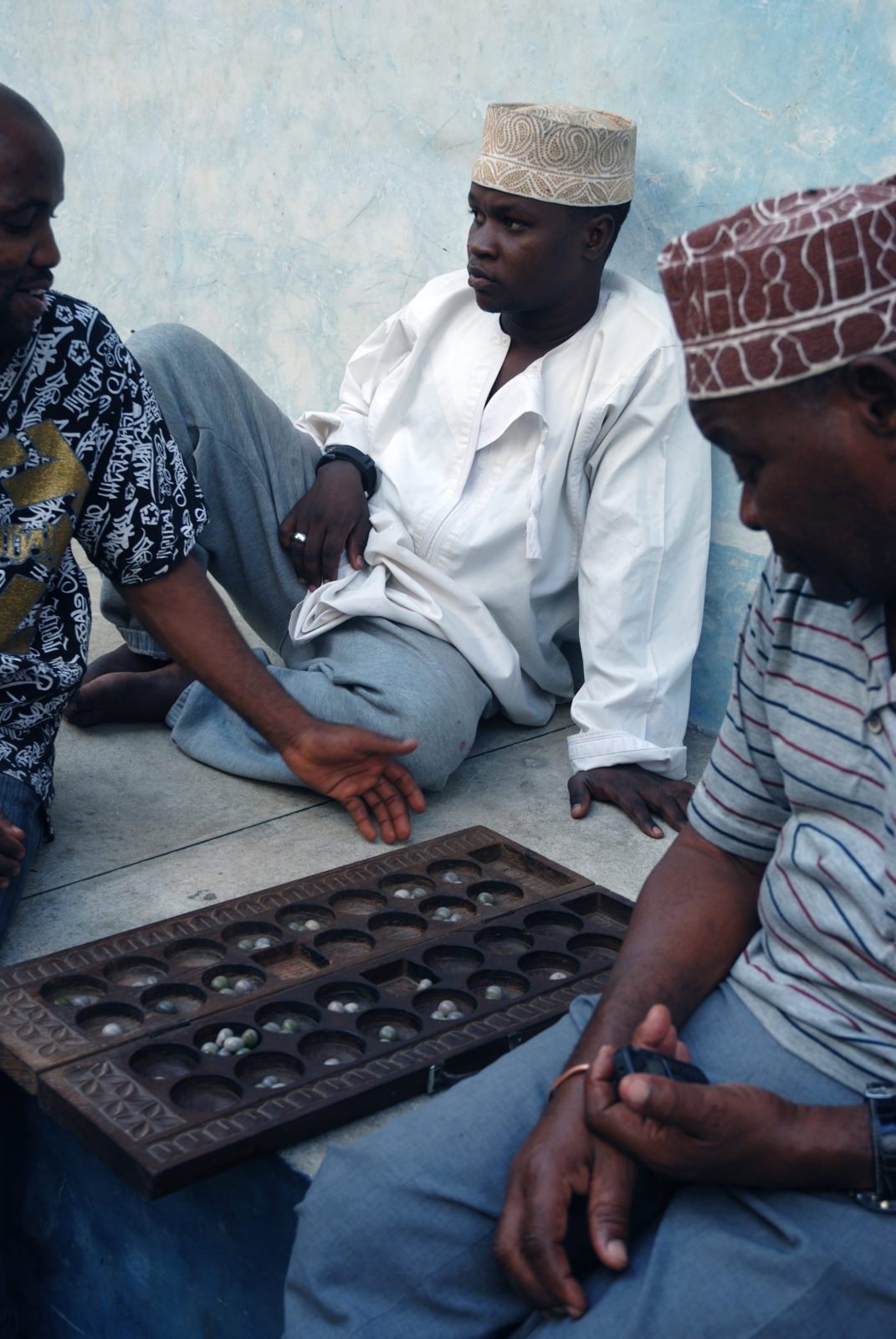 Wari is a game played on a board that consists of 12 cups placed in two parallel rows of six cups and a large cup at each end. The game is for two players; each player has a row of six cups and one large cup for prisoners.

Initially, there are four marbles in each small cup, as shown below.

The players decide who is to go first, and the first player takes all the marbles from one of his cups and places them one at a time into successive cups in an anticlockwise direction starting with the cup immediately to the right of the emptied cup and continues round his opponent’s cups if necessary.

The second player then takes all the marbles from one of his cups and distributes them similarly in an anticlockwise direction.

Now consider an example. Suppose player A goes first and removes the four marbles from cup 5 and distributes them into cups 6, 7, 8 and 9. Cup 9 does not contain two or three marbles so the turn ends. This can be represented by A(5,4).

The position is now as shown below:

Which can also be represented as:

B’s last play was into A’s cup 5 which now has two marbles in it. These are now removed and are B’s prisoners. B places these marbles in the cup labelled B.

You are advised to play the example game using the rules given.

You are to write a program that will decide the winner (if any) of a game of Wari. To do this:

(a) Write annotated code that will create data structures that will represent the board and initialise their contents.  You should include a listing of this code. [6]

(b) Design and implement an interface that will show the players the number of marbles in each cup, including the large cups. You should use the data structures from (a). A screen shot of the interface is acceptable. You should include a listing of this code. [5]

(c) Write annotated code that will get the identity of the player that is to go first or allow the game to be terminated. You should include a listing of this code and any testing that you have done. [4]

(d) Write annotated code that will get the identity of the cup that is to be emptied or an indication that the player wishes to surrender. The code should fully validate the input. You should include a listing of this code and any testing that you have done. [5]

(e) Write annotated code that will distribute the marbles when a move has been made. This code should identify and empty the cups according to the rules. The number of marbles in each cup, including the large ones, after the move is completed should be displayed ready for the next player. You should include a listing of this code and any testing that you have done. [5]

(f) Write annotated code that allows two players to play a game of Wari. The game should continue automatically until a winner is found or a player surrenders. You should include a listing of your complete code. [7]

This task was worth 32 Marks and should take ~22.5 hours.  This is a software development task and an implementation task that originally appeared in OCR 2507 Task 3 Jun 2008.  All rights and copyright to OCR.  Please refer to the OCR Copyright Statement for further information.