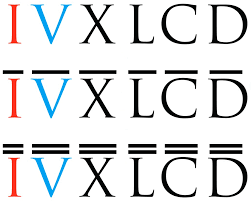 One definition of Roman numbers is

This is known as the additive rule and is the only rule to be used in this question.

Note that Roman numbers are always integers and cannot have fractional values. For example

The company wishes to use a simulation of this calculator so that the user interface can be tested.

You should use a high level language to complete the following tasks. State the language and version
you use.

(a) Design and implement a user interface that can be used to test the above facilities.

(b) Write a function that has, as a parameter, an already validated Roman number and returns its Arabic decimal equivalent.

Provide hard copy of your function code, which should be fully annotated.

Write a short program to test your function. Use a Roman number that contains at least three different Roman numerals.

(c) Write a function that has, as a parameter, an Arabic decimal number and returns its Roman number equivalent.

Provide hard copy of your function code, which should be fully annotated.

Write a short program to test your function. Use an Arabic decimal number that converts to a Roman number containing at least three different Roman numerals.

(d) Write a program that will enable your simulated calculator to add and subtract two Roman numbers. Your program must use the interface and the two functions you have created in (a), (b) and (c).

Provide hard copy of your program code, which should be fully annotated. [11]

(e) Provide a table to show data suitable for testing the program you have written in (d). The table should show at least six different tests. In each case you should indicate the reason for the test, the data to be used and the expected result.

Provide hard copy evidence showing the use of your test data. Any error messages should appear on the calculator’s interface. [12]

This task was worth 41 Marks and should take approximatly 22.5 hours.  It was a software development task and an implementation task that orginally appeared in OCR 2507 Task 3 Jun 2006.  All rights and copyright to OCR.  Please refer to the OCR Copyright Statement for further information.