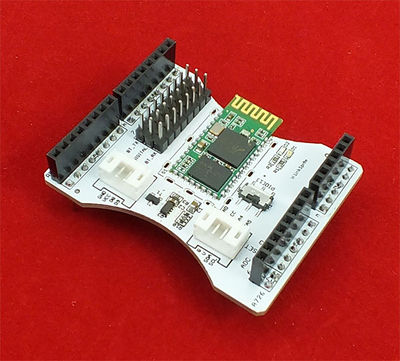 It is with mixed emotions that I purchased a Maplin N97DG Bluetooth Shield for the Arduino.  I think its a good thing for Maplin and the Buildr community that Maplin are putting some high street umph behind Arduino and hobbyist electronics but I still reel at the whole mega corporations thing – can’t have everything I guess!

Well after much trying  and googling I decided to return this shield because I just couldn’t get it to work.   The documentation regarding XTC seemed to apply to a different version (or not Mac OSx at least) and the lack of detail in the instructions meant I could not make any progress.  I will also add that the build quality seemed a bit lacking.

## UPDATE ## In frustration I ordered a Sparkfun BlueSmirf module from Proto-Pic.  Admittedly is costs a few pence more but more importantly it works.  I followed the Sparkfun BlueSmirf Tutorial and was up and running in five or so minutes.  My only disappointment is that I didn’t order the gold version, which would have given me greater range.