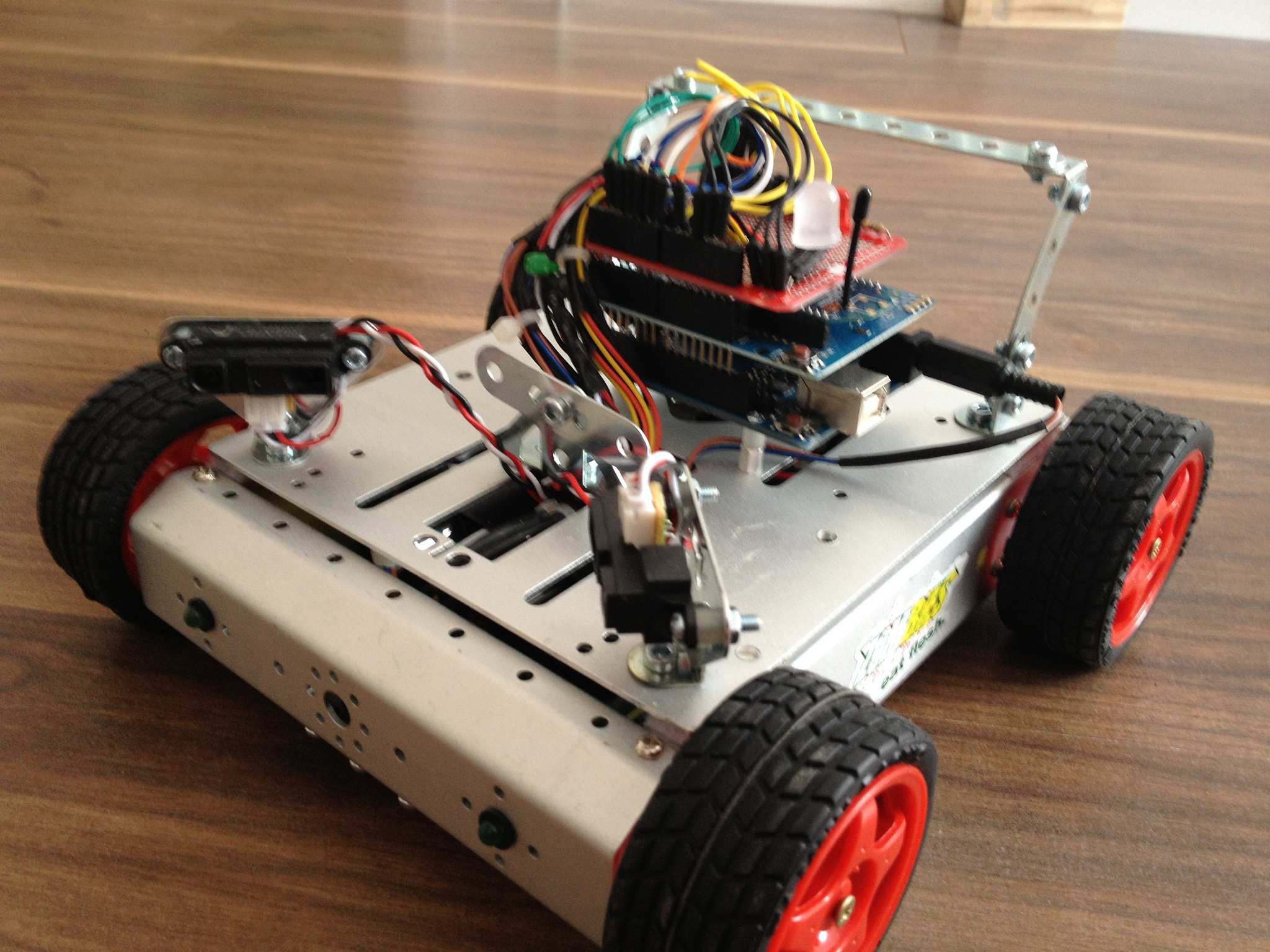 After much deliberation I finally purchased the 4WD Aluminium Mobile Platform from RobotBase.cn and available in the UK from Robot Bits.  This 4WD metal base arrives in kit form with motors, a battery holder and switch.

My first impressions are:

Those negatives aside once together it appears to produce a good strong and stable base for building into an Arduino robot.   Before beginning to construct the chassis you’ll probably be looking for a copy of the instruction manual from the RobotBase.cn website.

I’ve been pretty slack recording the build but are some annotated photos upon completion.  In this first photo, you can see the control stack and starting from the bottom you have:

I have used Meccano to provide a carry handle and assist the mounting of two Sharp 2Y0A21 Infra-Red Sensors on the front.  The lid is slightly proud from the main base because I am now using velcro to hold it on after two of the threads failed – be warned – this is a very soft aluminium chassis!

In the next two photos you can also see the RGB Led (located on the prototype board) and a pair of green LEDS (1st photo) and red LEDs (2nd photo) which are all used to indicate the current mode and direction of travel for the robot.

Below is a close up of the stack which also shows the switch and charging connection.

If we lift the lid you can then see the Robot Base Dual H-bridge Motor Driver supplied by Proto-Pic and the new 8 slot battery pack.

I was pretty impressed that the chassis came supplied as standard with a charging circuit and appreciated that once everything was screwed down it was going to be a pain to unscrew and replace batteries however during the initial build I happily used 6 x 1.5v non-rechargeables however, my joy ended at the sametime that first set of batteries died – 6 x 1.2v rechargeables was not going to give the same power and meant that the robot quickly came to a stop.  After a failed attempt at a 9.6v battery pack which refused to fit or be resoldered into a 2×4 arrangement I opted for a 8 slot battery holder from Maplin this has worked brilliantly.

In future I will only use n slot AA battery holders and standard AA rechargeables unless absolutely necessary!

In this shot taken directly at the front you can see the complete sensor arrangement including the two sharp sensors in a cross-over arrangement and the three line sensors underneath.

Setting up the Sharp Sensors to provide input on the distance was easy if you followed the instructions given online however, getting accurate readings that allowed for consistent and reliable object avoidance was more challenging.

In the end I opted for a three average reading that avoided erroneous readings from interfering with the progress of the robot.

The H-Bridge driver was pretty easy to set up and after writing the initial code inside a simple Arduino script I converted it to a library.

It had been a long road getting all the equipment required for the wireless connection to work as XBees and the like are not cheap.  In the end I opted to get the more powerful 60mW type so I had more options available in the future.  This beastie is able to communicate over 1 mile and should be perfect for a future drone or water born project.

The first challenge was to get the XBee sending back sensor readings to a receiving station connected to a computer.  A future development here will be for it to map out an area such as a tennis court or multi-purpose all weather pitch.  Attached are the libraries I created that allow a sender to transmit strings back to the receiver.

Another challenge for another day will be to control the robot manually via the XBee while still receiving information back from sensors, cameras, and/or GPS units mounted on the robot.

The kit comes with a switch and charging socket but the instructions and photos are provided in Chinese so here are some in English. You are going to attach 3 red cables to the switch (long, long, short) and 2 black ones to the socket.  With the missing pin gap on the socket pointing upwards you should attached the black wires to the left and bottom pins leaving the right one free.

Now link the short red wire from the switch to the socket before tidying up your wiring with some cable ties.

With the power circuit almost complete you are now able to attach connectors suitable for connecting the battery pack, Arduino and motor driver.